“I’ve been so proud to see her come into her own and develop that confidence to be on stage,” said Eli Geddis of his daughter Bergen, age 6. Both play rats in The Pied Piper of Nelsondorf. Photo: Bill Metcalfe Ten-year-old Jean Johnson and her mother Raeanne Gow perform together in the chorus of The Pied Piper of Nelsondorf. Photo: Bill Metcalfe The cast, chorus, and band in rehearsal (without costumes or stage sets). Photo: Bill Metcalfe 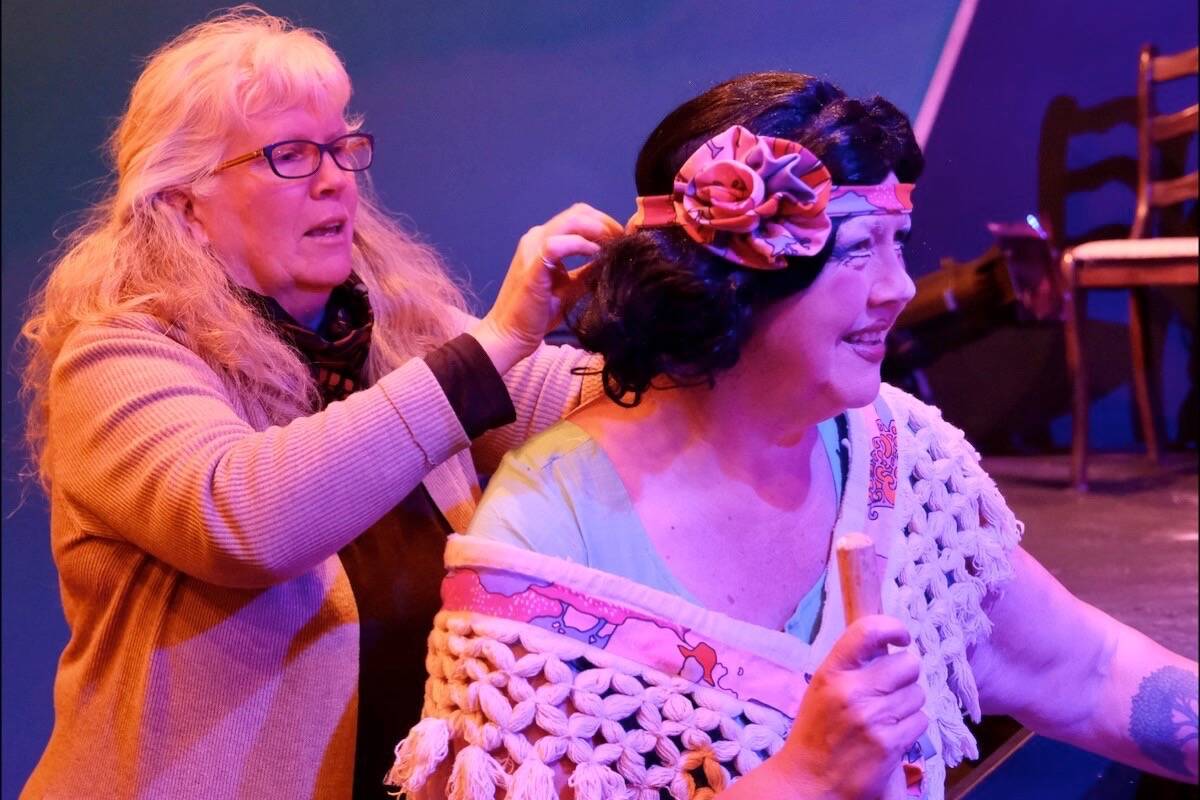 Six-year-old Bergen Geddis says the best thing about playing the part of a rat on stage is “the squeaking.”

She and her father Eli Geddis are cast members in this year’s pantomime production of The Pied Piper of Nelsondorf coming up at the Capitol Theatre on Dec. 1 to 4.

Bergen is one of a gang of a dozen Nelson rats, most of them played by small children, who get lured out of town by the melodies of the piper’s flute.

Her father, a veteran of several of the Capitol’s 33 annual pantomime productions, says being on stage with his daughter is special.

“When we auditioned, I could tell that it was pretty overwhelming for her,” he said. “But I’ve been so proud to see her come into her own and develop that confidence to be on stage. I hope this is the first of many joint productions between the two of us.”

Pantomime is an old British theatre tradition that has nothing to do with mime.

The story is traditionally a well-known fairy tale or legend, but with surprise plot twists and local humour. In this version of The Pied Piper of Hamelin, set in Nelson, there is a local rat infestation, a cryptocurrency mine, kombucha, an affordable housing crisis, and more.

The opportunity for parents and kids to perform together, singing and acting and dancing in an inter-generational cast of dozens, is built into the pantomime.

Kids under 13 are not allowed to participate unless one of their parents does too.

So for years Nelson kids have been helping their parents venture past their adult comfort zones by performing a wacky musical story, with dancing and zany costumes, in front of usually sold-out Capitol Theatre audiences.

“It sets up this lovely thing that I’ve just been super fond of for years,” says writer and director Laurie Jarvis, “which is parents and kids — they’re learning their parts on an even playing field and are equally challenged, no matter what their age. It’s lovely.”

Jarvis, who has written and directed many Nelson pantos (“I’ve lost count”), says she gets many people auditioning who may have never been on a stage before, but they do it because of the pantomime’s welcoming and fun vibe.

“It’s not too serious,” she says. “It’s not super difficult. It’s very participatory.”

Jarvis says the original plot of the Pied Piper of Hamelin is “pretty grim,” so she has lightened it up a bit (no children are stolen, no rats killed) and set it in Nelson, with lots of local references and jokes.

Jean Johnson, age 10, and her mother Raeanne Gow, are both pantomime first-timers and are part of the chorus in Pied Piper. Jean has the most stage experience of the two, having performed as part of her dance class.

“I really love acting,” Jean says, “and I like this because there’s a whole bunch of people that I don’t know, and I’m getting to know, and it’s on a big stage.”

“It’s been such a great opportunity to do something creative together,” her mother says. “This has been such fun. We’re playful, we’re learning lines, there’s jokes, and it’s a commitment for us.”

The production stars Ty Wright as the Pied Piper. Eva McKimm is the music director, Clinton Swanson leads the four-piece on-stage band, and the choreographer is Carly Brandel.

According to tradition, a pantomime has a character known as the dame — a female character played by a man.

But this year Jarvis has decided to bring the dame into the 21st century because she doesn’t want “the joke to be a guy in a dress.”

She says she picks the best person for the role, regardless of how they want to express their gender.

This year’s dame is played by Mary Defeo.

“The dame is always the mom figure, and somebody who struggles,” says Jarvis. “So usually she’s a single parent or a widow, and she’s warm, she connects with the audience, she has the ability to laugh at herself, but she also has a temper and an intolerance for unfairness. She’s also funny.”

‘Gaslighting’ is Merriam-Webster’s word of the year for 2022