There have never been more women involved in politics in West Kootenay Boundary than at present.

Five are mayors, two are MLAs, and they form a majority of council in Nelson, Rossland, Fruitvale, Greenwood, Kaslo, Slocan, and New Denver.

It’s a far cry from a century ago when politics at all levels were not just dominated by men, but women weren’t even allowed to run for office.

That rule didn’t apply to school boards, however. The first woman elected in West Kootenay was Minnie Kane Livingstone of Kaslo, who served as a trustee from 1900-03.

According to Historical Kaslo, “The men at first were rather annoyed at the idea of a woman on the school board, but soon became accustomed to the idea and saw that it had its merits.”

(This was five years after Maria Grant of Victoria became the first female trustee in B.C.)

Following the granting of suffrage in B.C., Kaslo was also the first municipality in the province to elect women to council.

Of the ten candidates in 1918, six were women, and Grace Caldwell and Catherine Hughes were successful — although they had to endure disparaging suggestions that it was only due to a lack of men.

The first woman mayor in the Kootenays was Emilie Popoff in Slocan, acclaimed to the first of two terms in 1947. (She wasn’t the first in B.C., however; that distinction belongs to Stella Gummow, elected reeve of Peachland in 1943. She also had a local connection: her family moved to Greenwood in 1901, then lived in Nelson, where her mother became a charter member of the city’s Women’s Institute.)

Popoff’s example set a trend that continues in Slocan to this day. It was the first local municipality to elect its second woman mayor (Agda Winje in 1971), the first to elect its third (Madeleine Perriere in 2008), and the first in B.C. to elect an all-woman council. (Men ran for mayor and council in the last election; they just didn’t win.)

In 1977, Castlegar became the second local municipality to elect a woman mayor. Audrey Moore was also the longest serving, at nearly 17 years, and was president of the Union of B.C. Municipalities. (While it’s outside the geographic boundaries of this list, it’s also worth mentioning the late Lela Irvine, mayor of Creston in the ‘80s and ‘90s.)

Since then, every West Kootenay Boundary village and city has had a woman as mayor with the exceptions of Nelson, Trail, Silverton, and Warfield.

In Nelson’s case, that’s not for lack of trying: nine women have run for mayor since Annie Garland Foster in 1922, two years after she became the first woman elected to city council. (Donna Macdonald came closest to winning in 1996 and 1999.)

Also in 1922, Doris Robinson ran for mayor of Trail and finished a distant third. Near as we can tell, no woman has sought the job since, although there have been five female councillors.

Sarah Helena Nash Keen, who served as school trustee in Kaslo in 1913 and was an unsuccessful council candidate in 1918, ran for mayor in 1933 after a year as alderman. (Her husband, John Keen, was Kaslo’s third mayor.)

Had Foster, Robinson, or Keen won their respective races, they would have become Canada’s first woman mayor. That distinction belongs to Barbara Hanley, who took office in Webbwood, Ont. in 1936. 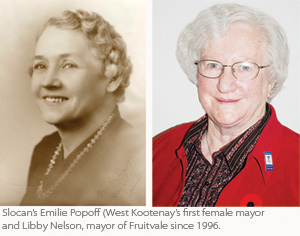 The first woman to seek provincial office in this area was Ruth Euerby for the Progressive Conservatives in Grand Forks-Greenwood in 1953.

The first elected was three years later in the same riding. Lois Haggen’s husband Rupert previously held the job. She spent a decade as MLA and for a time was the only woman in the Legislature. She ran for mayor of Grand Forks in 1967 but was narrowly defeated.

Like Haggen, Katrine Conroy secured a seat formerly held by her husband when she was elected by a landslide in West Kootenay-Boundary in 2005. Former Nelson city councillor Michelle Mungall also received a ringing endorsement in 2009 when she became the first woman elected in Nelson-Creston.

No woman has ever been MP for our area, and none has ever finished higher than third. The first to run was Matilda Belanger of the Labour-Progressive Party in Kootenay West in 1953. Nine years earlier, Margaret Oliver of Nelson put her name forward for the Liberal nomination but lost.

THE POWER OF EQUALITY

RCMP looking for man who invited Castlegar-area child into vehicle

Petition asks for protection of ancient cedars at Duncan Lake